Consequent to reports of a collapsed retaining wall that fell off one bed-room apartment beneath the wall and destroyed it completely at Owen Street on Sunday 22nd August 2021, the National Disaster Management Agency (NDMA) discharged its Directorate of Risk Reduction and Preparedness to visit the scene and ascertain the actual cause of the collapse and determine the severity of the damage caused. 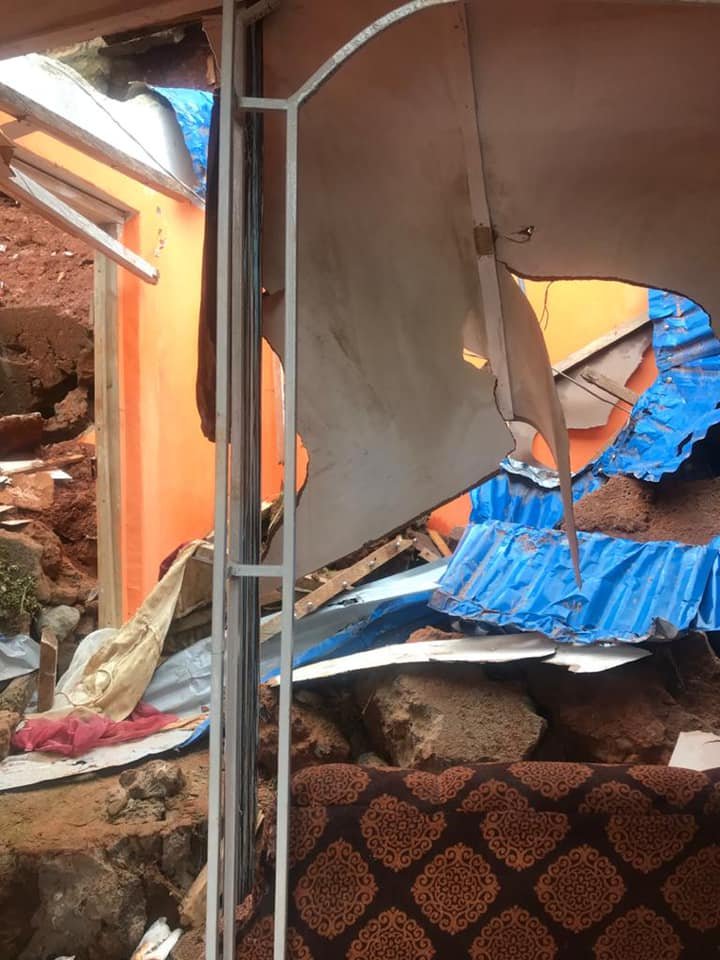 The Director of Risk Reduction and Preparedness, Thomas Lebbie and team, visited the scene on Sunday 22 and met the landlord and affected victims. From preliminary investigations, it has been proven that the actual scene is prone to disaster occurrences because of the topography of the area.

According to Director Lebbie, the said location is a ‘RED ZONE’ where houses were being poorly constructed under a high mud wall leading to a wide downstream drainage. “There was a slope collapse 10 years ago that killed 13 people at the same place. The victims were evacuated only for them to return and put up poorly-constructed mud houses on the same land three months later. The retaining wall seems very weak and was under extreme pressure from the building on top of it. There is no visible waterway from the collapsed retaining wall.” Director Lebbie noted.

The team further observed that most houses are built along slip-off slopes with fast flowing stream nearby. If the stream overflows, several homes will be destroyed with high risk of fatality. Most of the houses in the locality are built out of poor materials and design.

For immediate action, the National Disaster Management Agency has on its management meeting on Monday 23rd August agreed to demarcate the locality as a high risk zone and ordered the landlord [Mr. Conteh] to evacuate the remaining tenants on the other side of the house with immediate effect.

Reacting to the above, the Director General, NDMA, Lit. Brig. (Rtd) Brima Sesay said: “The only thing we can do for the victims is to respond with some relief items, which we’ll do anytime soon. However, let me assure the public that the NDMA will do everything possible not to allow anybody to construct a house on that land again. Ten (10) years ago, we lost 13 Sierra Leoneans in a similar way, we cannot afford to continue this way, and serious actions will be taken to stop anyone trying to build any structure on that land”.

It was also agreed that the NDMA should undertake a joint assessment [with the Ministry of Lands and other Agencies dealing with management of the environment] of the entire community to assess the level of hazard and vulnerability they are exposed to.